These letters contain a lot of „family dynamics” and I will let you be the judge as to if you think they should be on the website.  I have thought a long time about this, discussed it with my Dad and we think they give a realistic, but very sad picture of what life was like during and especially after 1947 happenings.  It breaks my heart to read these and I know my Grandmother’s family was not unique in their sufferings.  The war changed everything forever.  And it is still with us in certain ways even in the US-this is with the descendants of Ulucz and their children even though these children are grandparents themselves now. 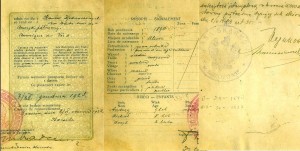 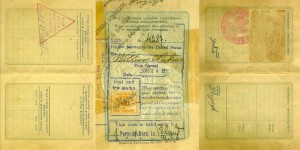 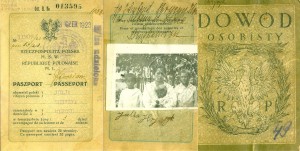 The children mentioned on the passport I believe had been born here in the USA but I believe the passport is when Julia went back to Ulucz to visit her mother and it was then that she brought the garlic back to Johnson City for my Grandmother.  So I think those children shown on the passport were just visiting Ulucz with Julia.  That was the last time Julia went back and the only time as far as I know.  And her married name was Hrycyk.  I know Julia came to the USA first because on my Grandmother’s Ellis Island papers it said she was coming to Julia Hrycyk in Binghamton, NY.  As far as I know they worked at a cigar factory in Binghamton that burned down decades ago.  It was also at this time that Endicott Johnson (EJ) shoe company was beginning to boom here and they hired many immigrants to make shoes.  The famous line around here for immigrants getting off the boat was „which way EJ?”.  The area I live in is quite a melting pot of European nationalities.  The Irish and Welch came first working in the coal mines of Pennsylvania followed by the Italians then finally the Slavic people.  They then moved north to New York State.  But the biggest populations in the Binghamton area are still Italians and Eastern Europeans.  I believe that EJ shoe factories and some of the mining companies actually sent their „scouts” to areas in Galicia to try to recruit workers for the factories here.  Many men came over here, leaving their families to make a lot of money (or so they thought they would), and never made it back to Galicia to rejoin their families but started new families here.  I am sure Binghamton was not unique in this-it must have happened all over the USA.