The Oasis restaurant in Johnson City , NY by the Gulaczok family

The Oasis, in Johnson City,NY was once bombed during beer price wars following Prohibition

In the years after Prohibition ended, the price of a beer rose from 5 to 10 cents — except at the Oasis in Johnson City. And it was attacked for it.

My thanks to all of the readers who, over the last few weeks, have been sending suggestions of possible future columns. They are a great comfort for me to know what interests the readers, what memories from their past they want investigated, and much more.

My thanks to Michael, for what I can only call a different type of incident involving a business that I have gone by literally thousands of times in my life but never given it much thought.

As many who follow this column have read, my maternal grandparents lived on Harry L Drive in Johnson City, and my parents drove there at least twice each week to visit.  We passed the Oasis Restaurant on each of those occasions, and I could instantly recognize the building from its stone veneer front and cursive style restaurant/bar sign. 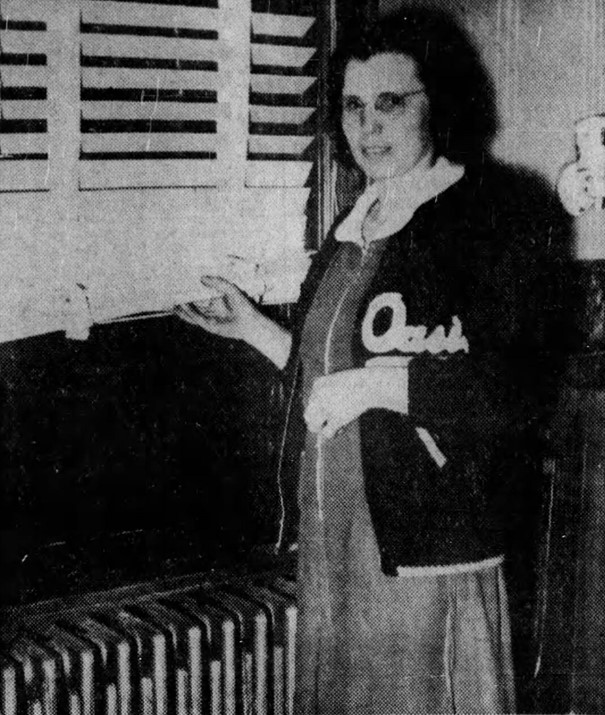 The business began around 1918, but in 1940, it was owned by Michael Gulachok, who operated the 153 Harry L Drive establishment along with his wife, Julia.

The Gulachoks lived at the same address, above the bar/restaurant, along with the rest of their family. It was a family-run business and things seemed calm, especially as the region came out from the end of Prohibition and alcoholic beverages once again flowed freely.

The only problem at the time was the price of a beer. For years after the end of Prohibition, the usual price was a nickel — that’s it, only 5 cents. However, the depths of the Great Depression and the need for revenue brought about increases on taxes that raised the price of beer in most bars to 10 cents.

You notice I said most bars, and, therein lies the rub. Michael Gulachok would not raise the price of his beer. He kept it at 5 cents, and the nickel beer war was on in the region.  Those establishments who were “bucking” the price increase found themselves at the end of a large stick from beer distributors and those bars who thought they were being undercut by the 5 cent beer bar owners.

Some of the owners relinquished, but Michael Gulachok did not. 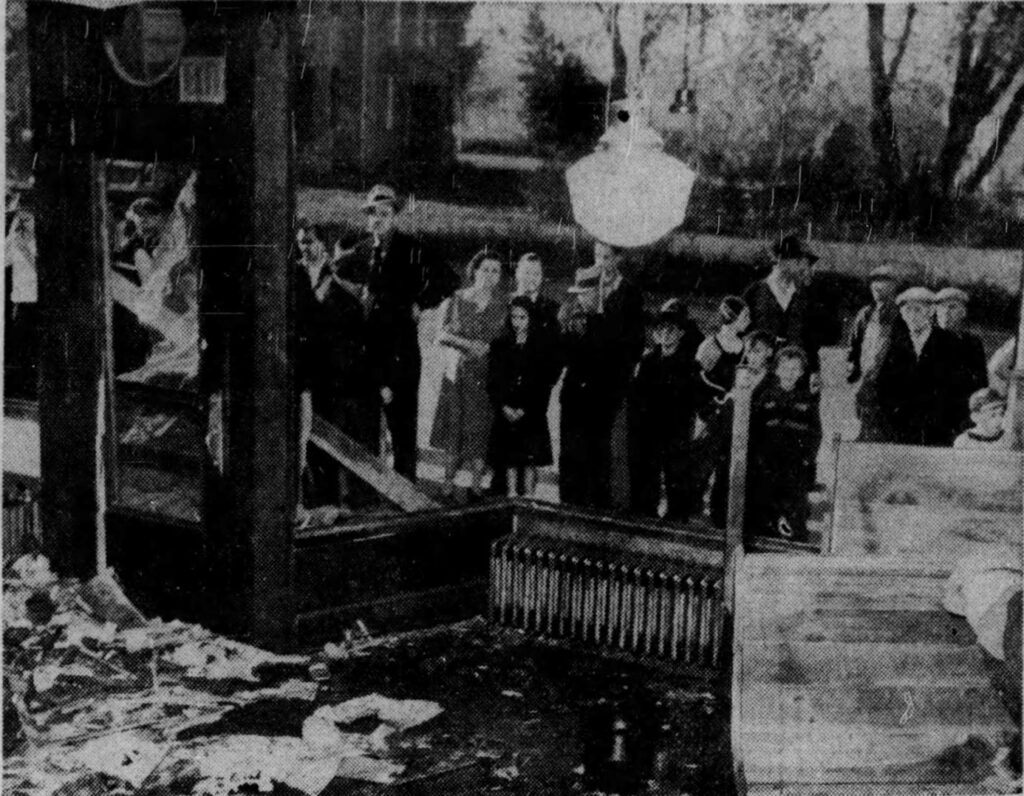 Onlookers on Harry L Drive look through the remains of the Oasis window in 1940.

In late September 1940, someone broke into the Oasis Restaurant to steal $170, a case of beer, some cigars and a wristwatch. It also set the stage for what occurred in the early hours of Oct. 5, 1940. It was around 4:30 a.m. that Saturday when someone in a car stopped in front of the Oasis. It appears that a cigar box full of explosive powder was attached to a brick that was thrown through the large window.

The police found young Al Plocinski, who was delivering on his newspaper route when he heard the bomb explode and a car speed away. That explosion blew out the windows of the building and knocked Gulachok and his daughter Sophia to the floor.  Luckily, none of the family was injured, but they were shaken by the incident. 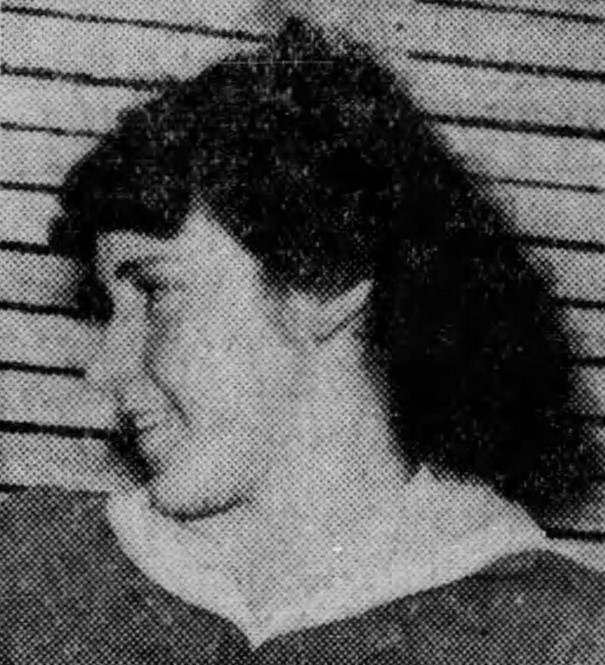 Sophie Gulachok was thrown to the floor by the bomb explosion.

Sophie Gulachok was thrown to the floor by the bomb explosion.Serious damage to the restaurant had occurred, and the Johnson City police, along with the state police, investigated. Remnants of the cigar box and the brick used were found, and evidence was sent to the FBI, as another similar bar selling 5 cent beers had been bombed in Buffalo just a few days prior.

Who was responsible for the robbery and the bombing? That was the question, but no one seemed to know the answer. There were 11 beer distributors just in the Binghamton area in 1940, and many more across the state. Some of those did have ties to organized crime, and did not take lightly to someone not complying with what they thought was how much the owner should charge. 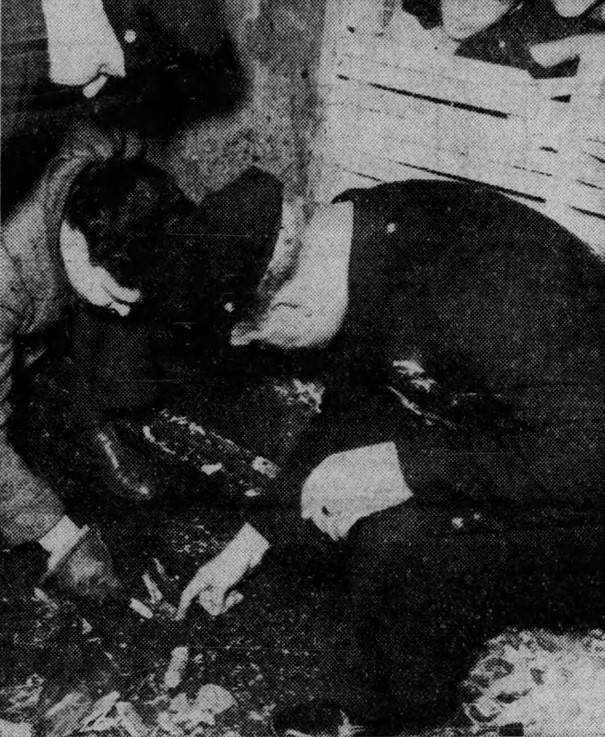 Officers Stephen Goga and Edward Okenica examine the remains of the Oasis bomb.

Some sales representatives who had made casual comments about how things might explode during this beer war were questioned. However, despite all this effort to find the perpetrators, no one was ever arrested in either the robbery or the bombing.

Eventually, the price of beer rose well above the 10 cents most were charging. As for the Gulachoks, the family repaired and continued the operate the Oasis, passing it down to the next generation of the family.

The Oasis is still there — although the beer costs more than a nickel. So it goes.

Gerald Smith is a former Broome County historian. Email him at historysmiths@stny.rr.com
https://eu.pressconnects.com/story/news/connections/history/2021/08/02/oasis-johnson-city-ny-bombed-during-post-prohibition-beer-wars/5421815001/