The following demographics data was compiled from various articles, historical geographical guides, books, almanacs, etc. that mention Ulucz.   It is possible that the information may not be accurate because quite often the immediate sources quoted other original documents as its sources that no longer exist, but the data does appear to be relatively consistent across the last 200 years showing that between the 18th and the early 20th centuries, there were 1,200-2,800 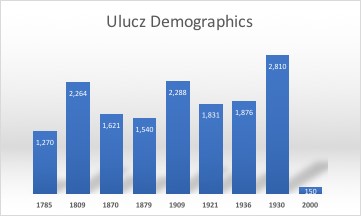 people living in Ulucz.  That population size is quite substantial for a village in that geographical area.  This “prosperity” was cut short after 1947 when the village lost 90% of its population5.  Prior to that there were other major events that may have contributed to the decline of population line 1812 – The French invasion of Russia during the Napoleonic Wars, 1846 – the Galician Peasant Uprising, 1847-1889 series of faminesG, and 1914-1921 – the First World War.